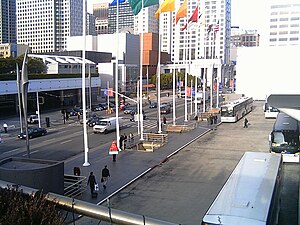 One of the problems of trying to blog a conference when you are going to session talks and socialising in the evening is keeping up to date with your blogging. Day 2 was a little slower in regard to talks and I was able to pick to some degree.

Sarah Hobbie gave a nice presentation on decomposition processes in soils and how reactive nitrogen affects decomp rates in leaf litter and soil organic carbon. She distinguished between slow and fast cycling pools of C in both leaf litter and soil organic matter. One of her key findings was that reactive N can increase initial decomp rates in litter but lead to great mass of C in the slow cycling carbon pool. Another key point made however was that exceptions to the various “rules” Hobbie presented were manifold in the literature and data.

I attended several other talks but this was more out of general interest and not something I intended making notes on. The Exhibitor floor opened for the first time on Tuesday so I spent a fair amount of time wandering around in looking at the various exhibits. Lunch consisted of an $8.50 ham and cheese sandwich from the stall in the Moscone Center (which wasn’t worth the money so won’t be eating there again!)

In the afternoon I attended a couple of talks on a communicating climate science theme. Mike Mann (of Penn State & Real Climate fame) gave an entertaining talk on the climate wars; dispatches from the front lines (and plugged his book of the same name due out on Jan — hmmm his advertising worked…). Whilst I agreed with the general points of engaging with climate sceptics in their own back yard (new and TV media) to counter their misinformation, I was left with the distinct feeling that had Mann and many of his colleagues engaged sooner and more fully with the skeptics, they’d have had an easier ride. At least they couldn’t have hit them once with the “they aren’t playing ball” outcry and have just been left with decrying them over the science, which Mann and colleagues could easily rebut. Openness in science is of prime importance; open data, open code, open methods. We shouldn’t have anything to hide, no matter how the data/results might be misinterpreted by opening up. We can always address misunderstanding or misinformation from the skeptics and do so in various media as suggested by Mann and do so in a way amenable to the lay person. Anyway, despite my reservations that Mann didn’t go far enough in his calls for engagement, his was a thoroughly entertaining and thought-provoking talk delivered to a pack auditorium.

After that I did some work and tended the email inbox, before heading off for a pizza and a beer with John Anderson in a small local Pizzeria, just up the hill from our hotel. Bed by 10pm. How Rock and Roll!